Max Goof is the son of Goofy. He originated from the 1950s Goofy shorts as Goofy Junior, first appearing in the 1951 short Fathers Are People, and remained a regular in subsequent Goofy shorts of that era. His modern iteration, redesigned and renamed "Max Goof", first appeared in the 1992 animated TV series Goof Troop. Since then, Max has appeared in several features, usually alongside Goofy. He also appears in some episodes of the Disney Junior Animated Series. His canon age is 14 & 11(in very rare cases)

His personality has evolved as the character has aged. As a child, he is shown to be very close to his father. He spent most of his time tagging along with Goofy during his father's shenanigans. However, as he grows, he becomes embarrassed by his father's antics. In the Goof Troop show, there were times he would get suckered in by Pete and his get-rich-quick schemes, only to come around towards the end. It seemed, personality-wise, that P.J. was more like Goofy at times, while Max seemed more like Pete. Max has been in love with Roxanne and Mona.

He is often told that he is very much like his father, and his response is always along the lines of "Please don't say that." or "I wish you didn't say that." In spite of the denial, Max's mannerisms echo Goofy's at times including Goofy's laugh and clumsiness.

As a teenager and young adult, Max is portrayed as calm, cool, and struggles to keep his father's goofiness as far away from him as possible. He is often seen trying to impress a love interest, most notably Roxanne.

Young Max's first appearance was in the episode The Griffin Games, where he along with Goofy is in the crowd; however, some don't count it as canonicall since he's younger. His first appearance was in Owlette and the Snowy Owlette when he is helping Greg make cookies. When Greg asks Amaya to go get supplies, Max says one sentence: "Greg we're out of stuff!". His outfit is different as well wearing a green Christmas sweater instead of his red shirt and a Santa hat.

He also shows up in Luna At Your Service! drinking a milkshake and reading a book. Of course it's a silent cameo.

He appearently makes an appearance helping make macaroons in Owlette’s Well That Ends Well. He also speaks about Amaya saying "What's up with Amaya? She's not as happy as usual".

The first time Max & Roxanne are seen together is in Gekko's Lovely Luna when they are seen hanging out at the carnival together. The last time they are seen is during the concert.

Max has also appeared in Romeo and Owlette but as a silent cameo sitting at the cafe. He's drinking a smoothie. 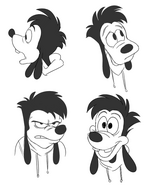